I started looking on Pinterest for ideas our boy's cars this year.  Which led me to their cars from last year, which were the best so far, and I thought I had to share them! 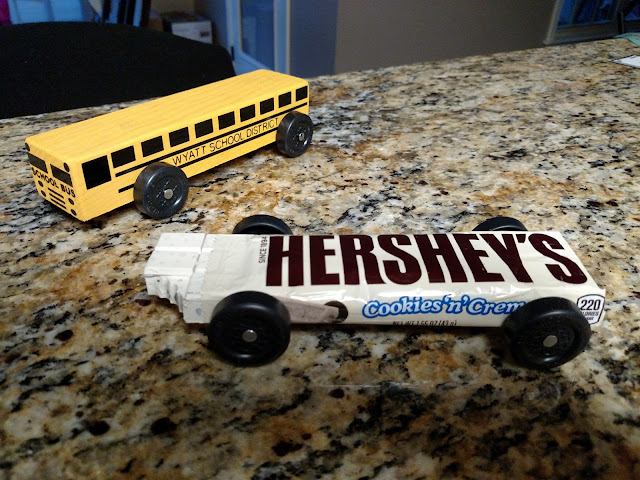 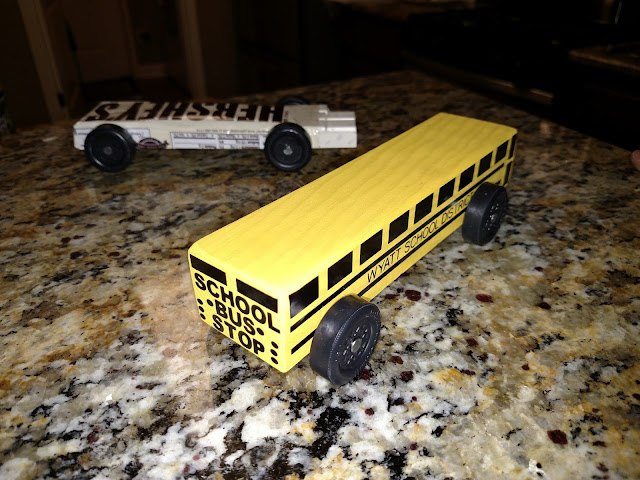 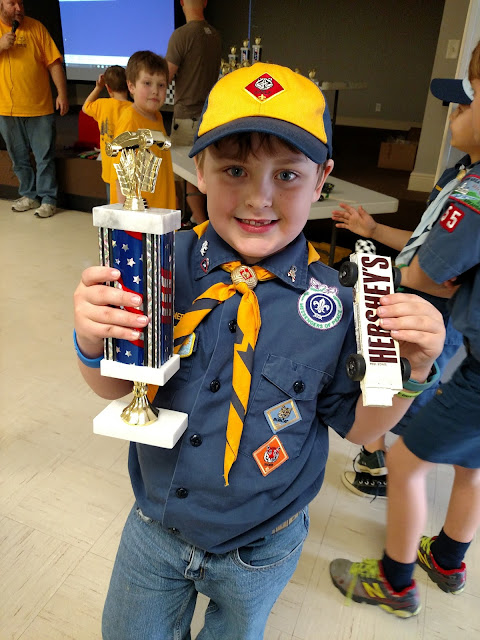 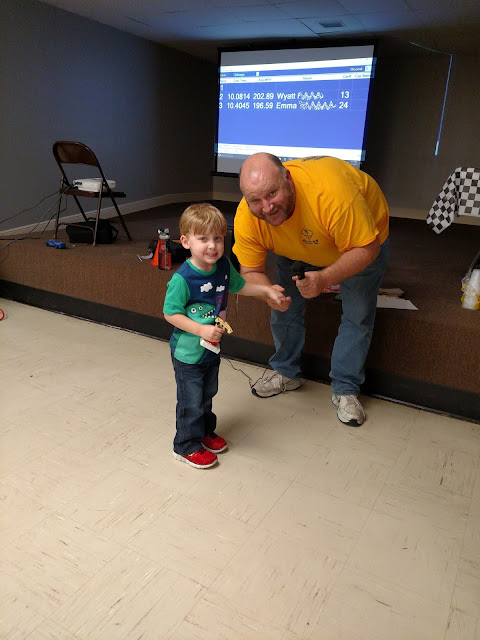 Seth’s car was just cut really thin and we used weights that looked like the bars of a Hershey bar, painted it white, then put black sharpie on top to look like the cookies, and painted white again.  Then we wrapped an actual wrapper around it and called it a done deal. 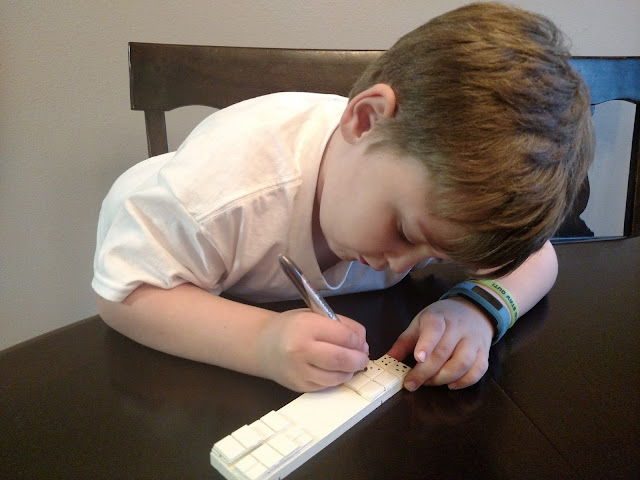 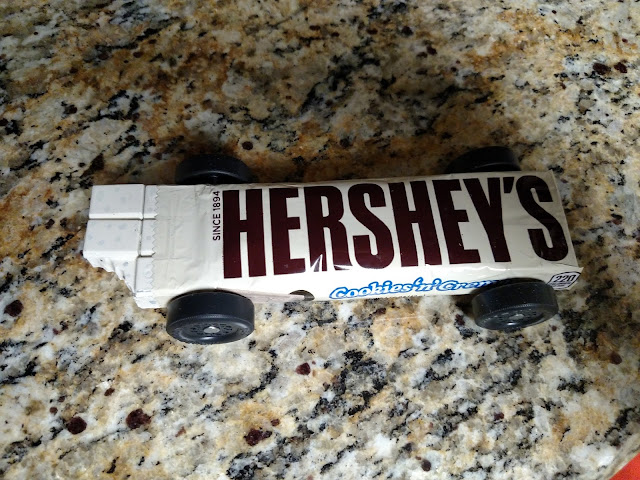 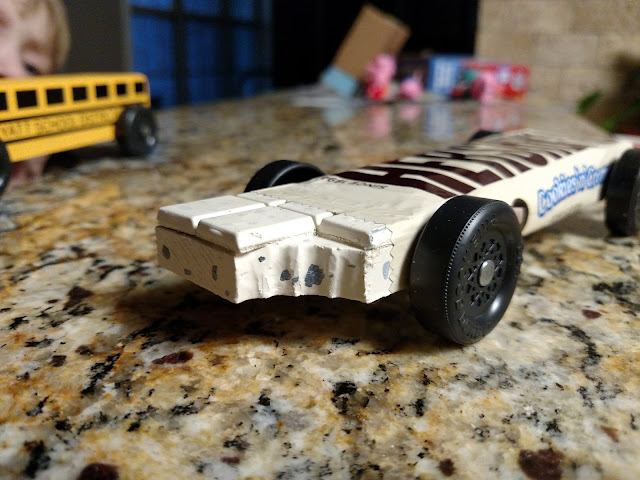 Wyatt’s bus, I cut decals out with my cricut from vinyl and just stuck it to the sides.  What’s funny, is that we seriously on sanded the bus, didn’t cut the block at all from the kit.  While he couldn’t compete against the scouts for an actual place, we did race it against the scout’s cars for fun, and he beat out a lot of them. 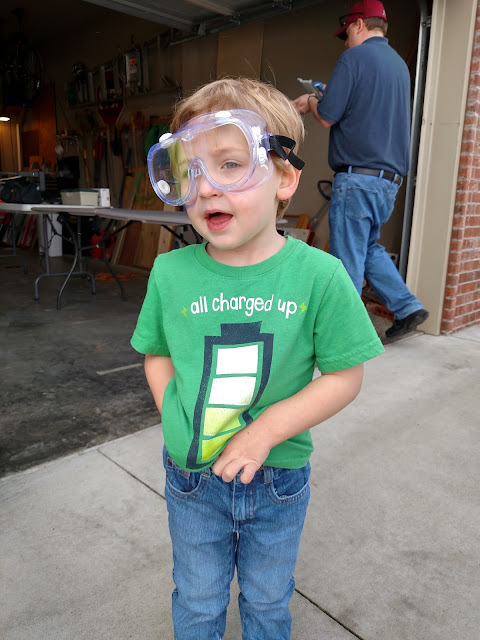 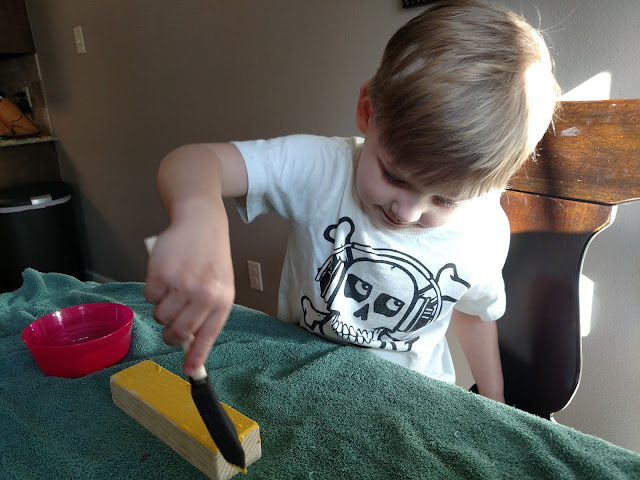 Good luck with your pinewood derby car, and hope that this provide you with some more ideas! 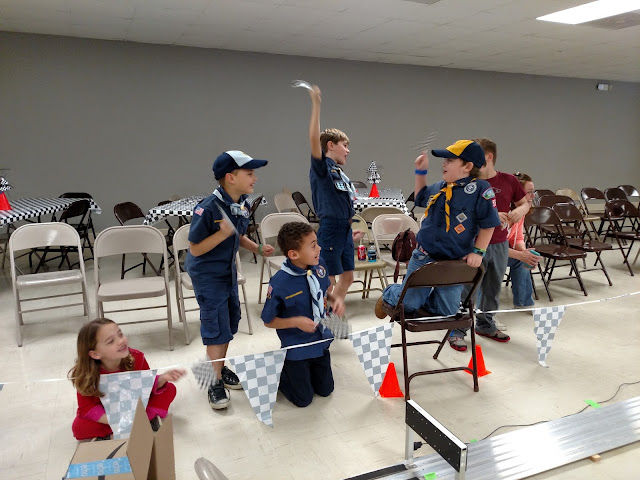 Bendy and the Ink Machine

So Seth has this thing where when his birthday planning time rolls around, he wants the newest stuff for his theme.  Leaving me with making pretty much all of the decorations, cake and my husband making the invitation all by hand.  This year was no different.  Bendy and the Ink Machine, it's the newest craze and that's what he wanted.  What is it, you ask?  It's a video game, a survival horror one at that.  Heard of Five Nights at Freddy's?  Yep...it's the newest craze, just like Freddy was.  I didn't go all out into the decorations like I usually do.  I've had some severe back pain for over a month now and the doctor still can't figure out why.  My decorations were simple, I made him a shirt, and he's totally in love with it!  I attempted to go all out on the cake.  Now don't go judging, cause I am a total fondant noob.  I did my best, and I have to say it turned out pretty awesome.  I did have trouble with the white fondant, so the side didn't look too great.  I got over it thought because I had already been working on it for over 4 hours and my back was killing me.  If I hadn't been in back pain, I probably would have started all over because I'm super OCD like that.  The party favors consisted of bendy straws (get it?!  I thought it was hilarious), candy, Bendy tattoos that I had made, and some bracelets.  Here are the pictures.  Hope you enjoy them, and they help you if you decide to have a Bendy and the Ink Machine (BATIM) party also! 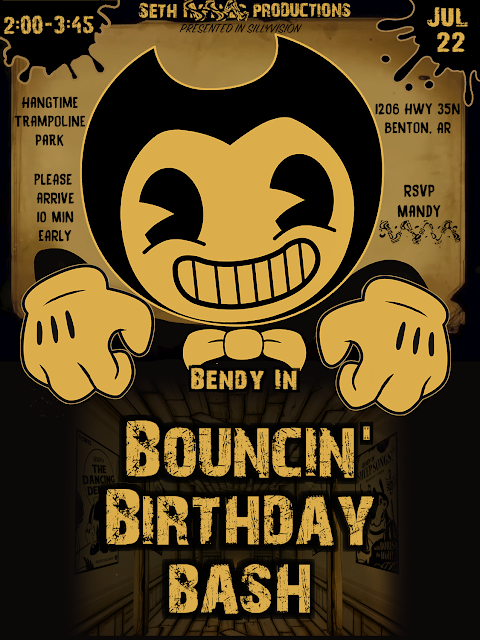 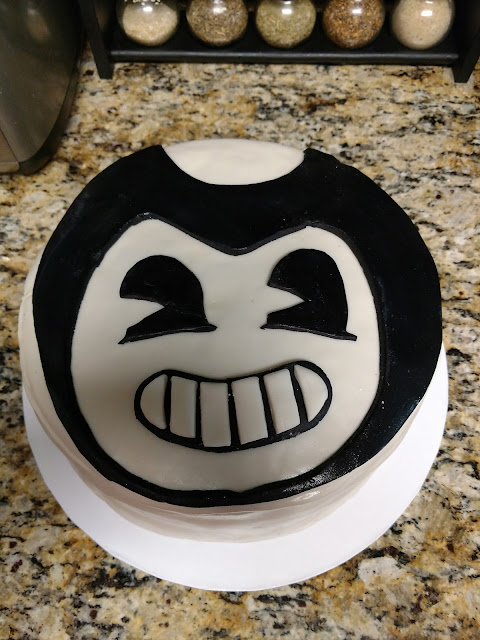 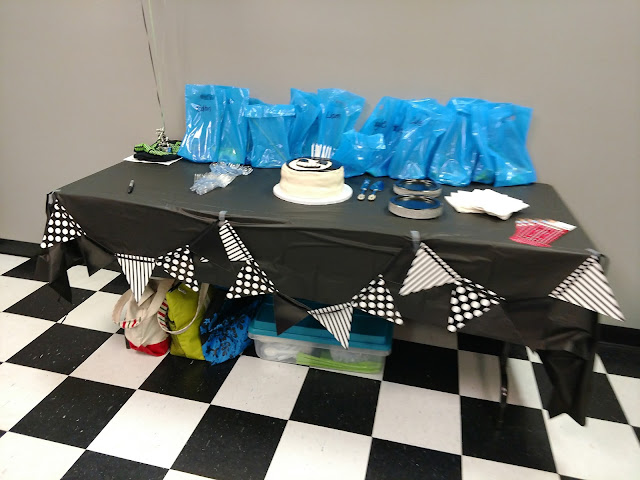 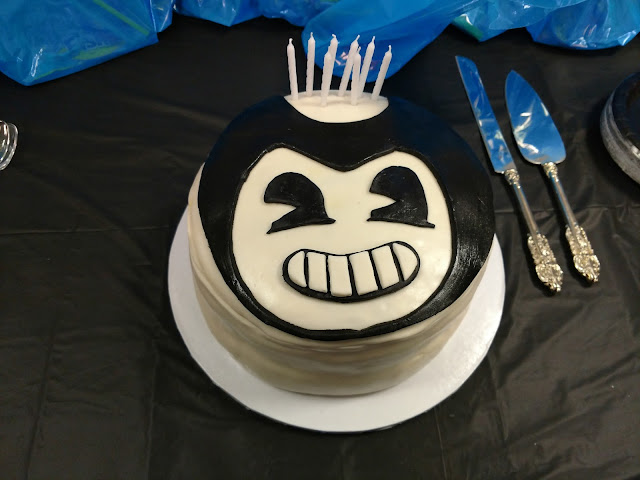 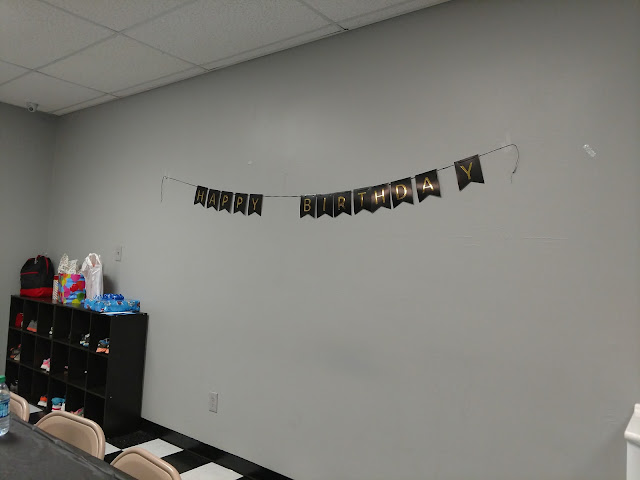 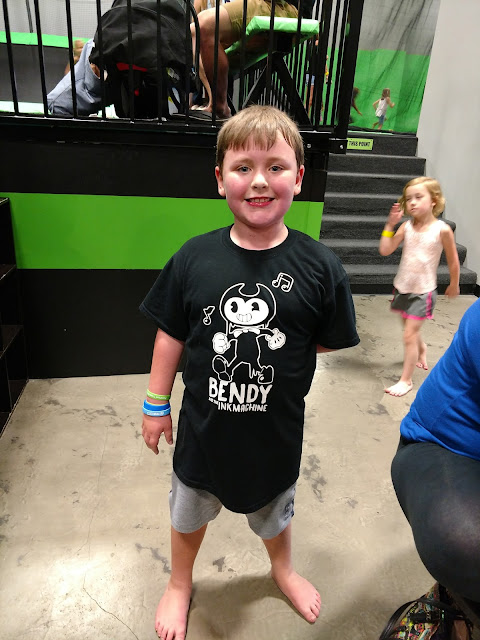 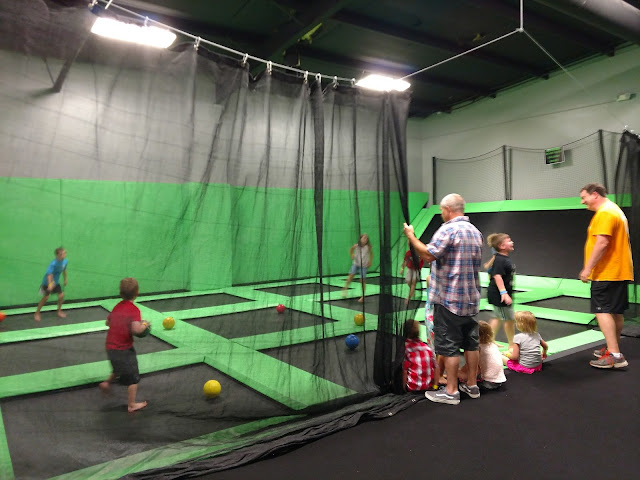 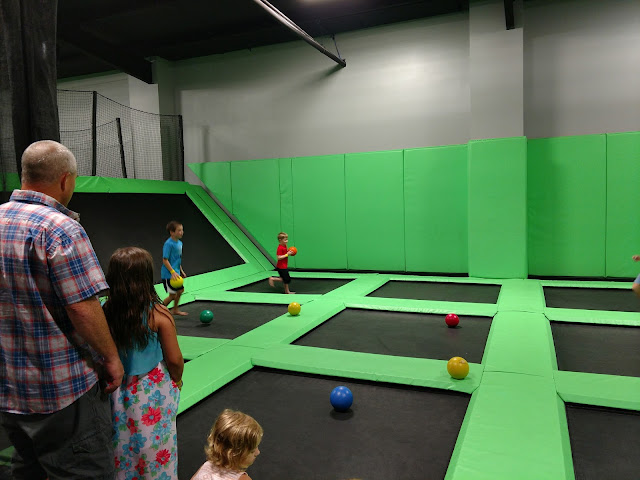 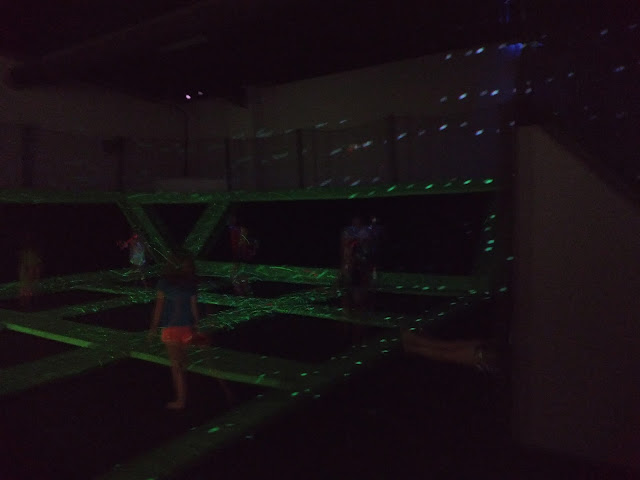 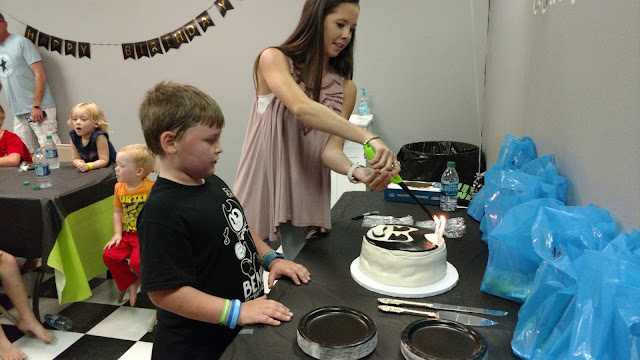 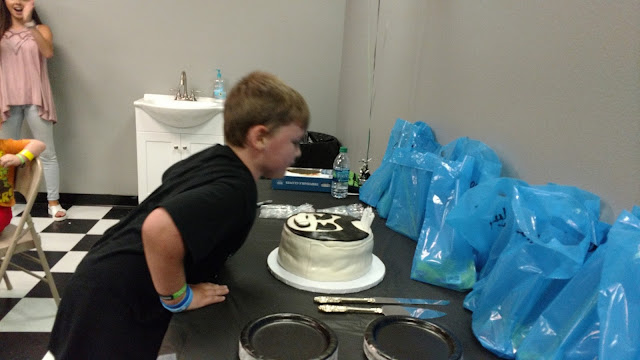 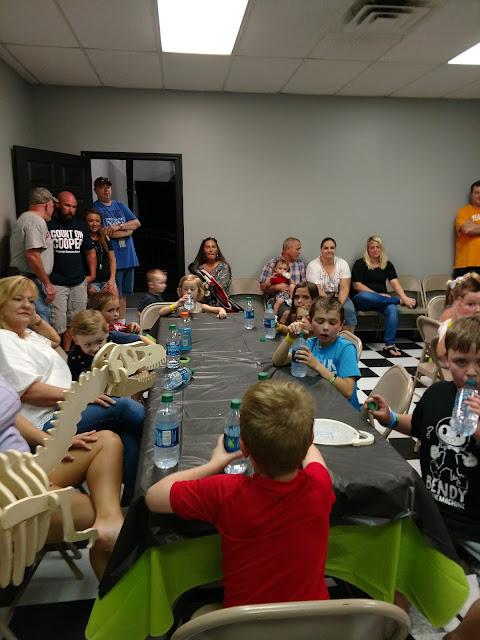 Oh my!  I just tried this the other day and I am in love with it.  I love that it's a taco, but completely different AND healthy, while still delicious!  Where do you get the Wildtree ingredients?  From me, of course!  Here's a direct link to purchase them!  Wildtree Lemon Pepper Blend, and Wildtree Natural Grapeseed Oil but you could just as easily use Wildtree Roasted Garlic Grapeseed Oil. 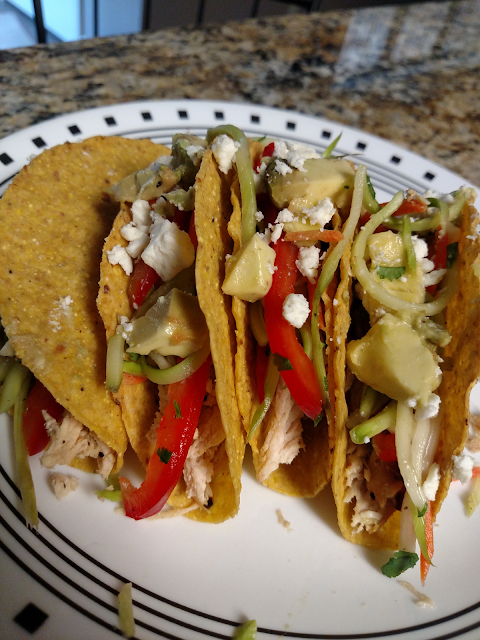 Prepare and measure out the broccoli slaw, red bell pepper, carrot, cilantro, lime juice, salt, and pepper.  Add the ingredients to a mixing bowl and toss to combine; set aside.  Slice chicken and season with Lemon Pepper Blend.  Heat Natural Grapeseed Oil in a 10-inch nonstick skillet over medium heat.  Add the chicken and cook on both sides until golden brown and chicken is cooked through: 165°F.  Transfer chicken to a cutting board to rest.  Shred the chicken once it is cool enough to handle.  Fill each taco shell with chicken, prepared slaw, avocado, and feta.  Enjoy!

This is a fantastic summer salad.  I love all the flavors and freshness of it.  It's also quite pretty to look at!  Where do you get the Wildtree ingredients?  From me, of course!  Here's a direct link to purchase them!  Wildtree Jamaican Jerk Seasoning, Wildtree Lemon Pepper Blend, and Wildtree Garlic Grapeseed Oil. 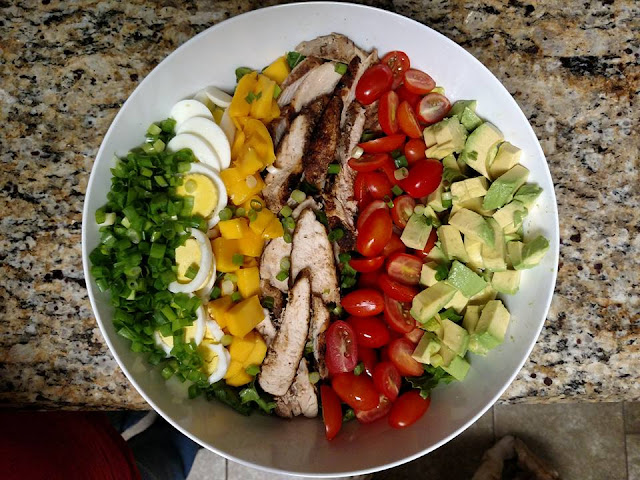 Season the chicken breast with Wildtree Jamaican Jerk Seasoning.  Preheat grill to medium heat.  Clean and grease the grill grates.  Grill the chicken for about 5 minutes on each side or until cooked through: 165 degrees Fahrenheit.  Cool for 5 minutes on a cutting board before slicing.  Prepare dressing by whisking together Lemon Pepper Blend, Greek yogurt, Roasted Garlic Grapeseed Oil, and red wine vinegar.  Thin out dressing to desired consistency using 1/4 cup water.  Toss together romaine and arugula.  Divide among 5 plates.  Top with sliced chicken, tomatoes, mango, avocado, scallions, and hard boiled egg.  Drizzle with prepared dressing.

This is a meal that we don't have too often, and I'm not exactly sure why.  It's delicious and super easy!

To make these awesome sandwiches you'll need the following ingredients:

Preheat oven to 400 degrees.  Place desired amount of hoagies open faced on a cookie sheet.  On one side of the hoagie, line with Canadian Bacon to cover and then top with Pepperoni.  On the other side line with Salami.  Top with desired amount of Mozzarella Cheese on both sides -- a little goes a long way. 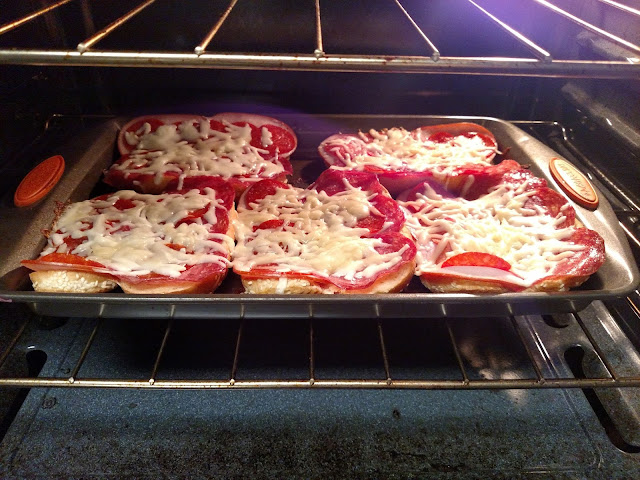 Bake for 10 minutes or until cheese starts to turn brown on the edges.  Keep a close eye on them, they cook quickly!  Cool for 3 minutes, top with a small amount of Ranch Dressing, and fold sandwich together.  Slice in half and enjoy! 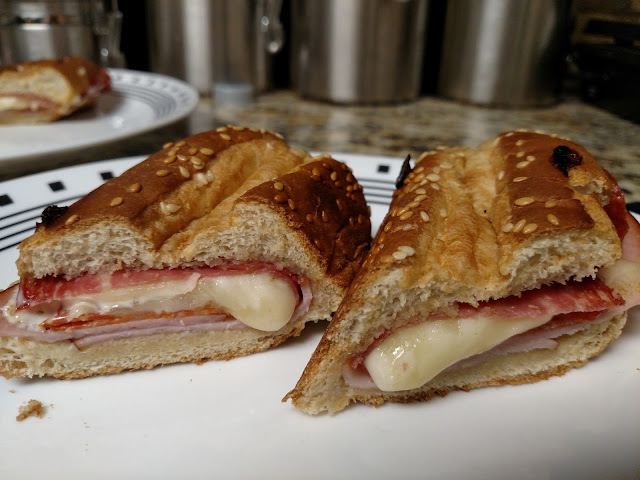 I think these two might just be my favorite recipes using Wildtree ingredients ever. Like seriously. They are THAT good! Here are the Wildtree ingredients you're going to need. European Dipping Oil - Mediterranean Balsamic for chicken and Wildtree Chipotle Lime Rub, Wildtree Italian Dressing Blend mixed with Wildtree Roasted Garlic Grapeseed Oil for the salad. 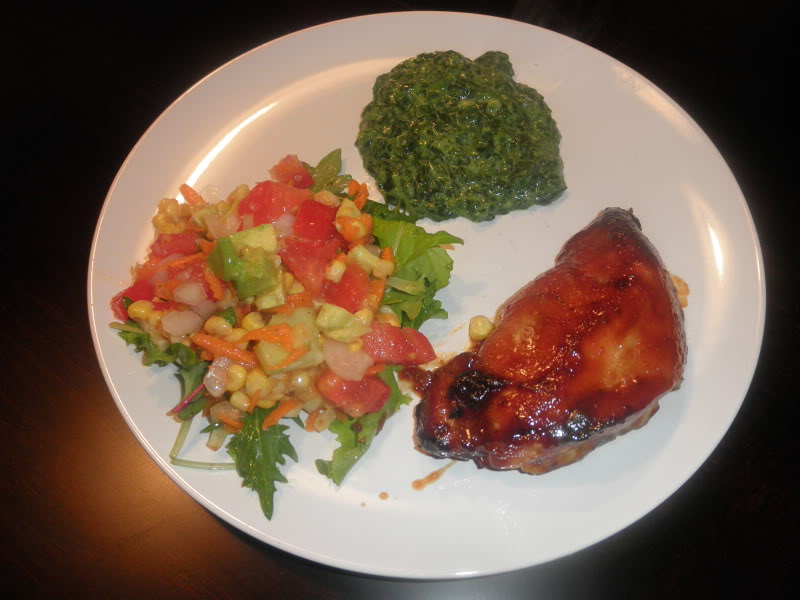 Mix the Balsamic Dipping Oil, Honey, Brown Sugar, and Soy Sauce in a freezer bag. Shake and squeeze the contents of the bag to dissolve the honey and brown sugar. Add the chicken to the bag. Remove air and either marinate 2 hours or freeze. Defrost in fridge. Preheat oven to 450ºF. Place the chicken breast on a foil-lined and greased baking sheet. Bake until the skin is caramelized and very dark in spots, about 20 to 30 minutes. Meanwhile, place leftover marinade in a small saucepan. Bring the marinade to a boil for 5 minutes, in order to kill bacteria. Reduce the heat to a simmer and cook until thick, about 30 minutes and set aside. Use a pastry brush to brush the cooked marinade onto the cooked chicken or serve marinade alongside as a sauce/gravy.

Cook or grill corn on the cob, then cut corn off the cob and place in a bowl while still warm with butter and chipotle lime rub. Stir until mixed. In a separate large salad bowl, combine the greens and veggies. Top salad with corn and avocado. Serve with Italian Dressing on the side.
Don't forget to check out my other recipes by visiting http://mydailyyak.blogspot.com/
www.mywildtree.com/MandyHaynes
Mandy's Wildtree - Facebook
Posted by Unknown at 11:21:00 AM No comments:

My family absolutely loves this pizza!  So delicious!  Where do you get the Wildtree ingredients?  From me, of course!  Here's a direct link to purchase them!  Wildtree So Quick And Easy Pizza Dough, Wildtree Alfredo Extraordinaire, Wildtree Scampi Blend, and Wildtree Garlic Grapeseed Oil. 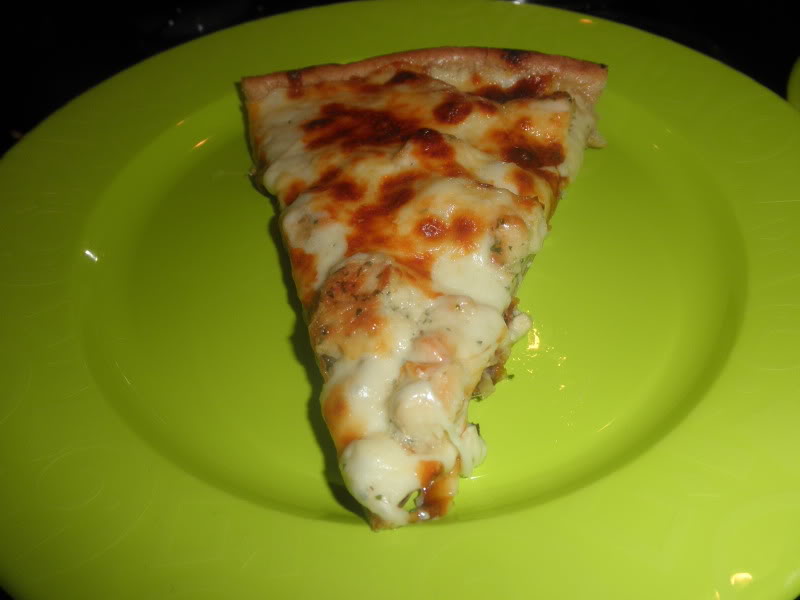 Season the chicken breast with Wildtree Scampi Blend.  Cook chicken in the Wildtree Garlic Grapeseed Oil, drain off excess oil and set aside.  Stretch prepared dough evenly around a pizza pan.  Spread prepared Wildtree Alfredo Extraordinaire evenly around the dough, leaving half an inch from the edge to the form crust.  Top pizza with chicken and cheese.  Bake according to package directions for pizza dough.